Copper based alloys have relatively low hardness and thus low resistance to abrasive wear. For this reason a high degree of wear can occur in the lower part of the mould where the strand shell causes increased levels of stress. To improve the service life of moulds, the KME group has developed Advanced Mould Coatings(AMC®).

Excessive wear of the moulds is accelerated by an incorrectly adjusted strand guidance system and casting parameters. Common causes are, the taper of the mould is not consistent with the shrinkage behavior of the steel, poor alignment of the casting machine (oscillation / strand guidance) or a casting speed that is not adapted to the mould geometry. These are all possible causes of a high degree of wear which ultimately leads to a change in the mould geometry.

When casting certain steel grades, the surface quality of the cast strand can become impaired by copper particles picked up from the mould wall (especially in the lower part of a mould) which can lead to development of star cracks. To avoid this defect, the mould plates of slab casting moulds used for the casting of these sensitive steel grades are protected with nickel or nickel alloy coatings. 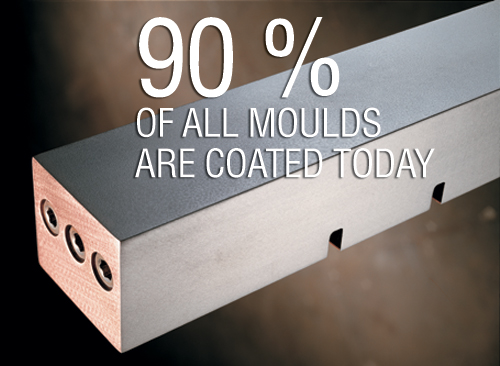